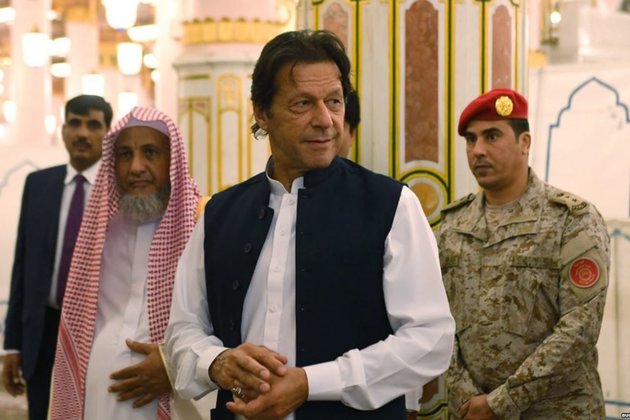 Pakistan's new government will start negotiations with the International Monetary Fund for emergency loans to ease a mounting balance of payments crisis, the finance ministry has announced.

Pakistani Prime Minister Imran Khan on October 8 directed his finance minister to meet with IMF officials at an annual conference of the IMF and World Bank in Bali, Indonesia, this week to discuss a potential package, the ministry said.

'The Prime Minister, after consulting all the leading economists, today decided to begin talks with IMF,' Finance Minister Asad Umar said in a video posted on Facebook and Twitter.

Umar said the main purpose of the talks will be a 'stabilization recovery program' to bring the country's economic crisis under control.

Pakistan has gone to the IMF repeatedly since the late 1980s. The last time was in 2013, when Islamabad got a $6.6 billion loan to tackle a similar crisis.

Pakistan's foreign currency reserves dropped in late September to $8.4 billion, barely enough to make its debt payments. Analysts say Islamabad could need as much as $12 billion in loans.

The new government blames the previous administration for the country's economic woes.

Before seeking an IMF bailout, Khan spent two months looking for alternatives, since the IMF is likely to impose tough conditions on government policy that would limit his vision for establishing an Islamic welfare state.

Khan's decision came after the Pakistani stock markets tumbled by 3.4 percent on October 8 -- a drop that was attributed to an earlier statement by Khan that he was still exploring options outside the IMF.

Khan's government at first sought economic lifelines from key allies, including new bridge loans from China and a deferred payments scheme for oil with Saudi Arabia, but it secured no large-scale deals.

Pakistan's current account deficit widened 43 percent to $18 billion in the fiscal year that ended June 30, while its fiscal deficit has ballooned to 6.6 percent of gross domestic product.

The rupee has fallen by more than 20 percent in four devaluations since December. On October 8, the currency was trading at 128 per U.S. dollar on the open market.

Brokers welcomed the news of Islamabad's talks with the IMF, saying it should clear up uncertainty about Pakistan's economic outlook.

'It was much needed and about time,' said Saad Hashemy, research director for the Pakistani brokerage Topline Securities.

He said the IMF is likely to give Pakistan a 'to-do list' as a condition of getting loans, including requiring further devaluation of the currency, interest rate hikes, energy taxes, and other tough measures.

As the world's lender of last resort for governments, the IMF typically sets such conditions on its assistance.

The IMF said in a statement last week that Pakistan was in need of significant external financing in the near term, and recommended increasing tariffs on gas and power while pushing for exchange rate 'flexibility' and higher interest rates.

'These steps would help reduce current account pressures and improve debt sustainability,' the fund said in a statement after an IMF delegation completed a routine visit to Pakistan.

The IMF also warned the new government that growth would likely slow and inflation rise further if it does not act quickly.

If the IMF agrees to provide a package of aid, it would be Pakistan's 13th IMF bailout since the late 1980s.

'The challenge for the current government is to ensure that fundamental economic structural reforms are carried out to ensure the that this spiral of being in an IMF program every few years is broken once and for all,' the finance ministry said.

With reporting by AFP and Reuters