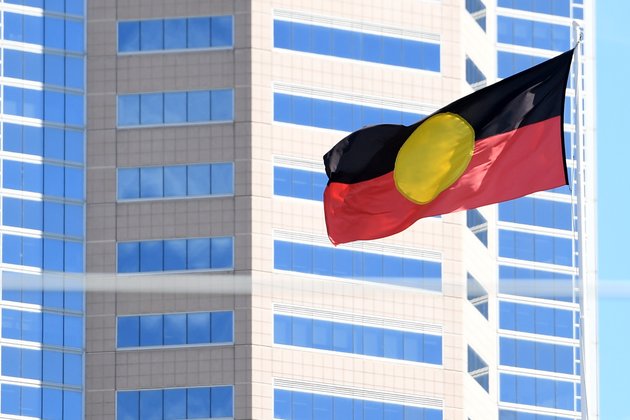 Explainer: our copyright laws and the Australian Aboriginal flag

Reports that two Aboriginal-owned businesses and the AFL have received cease and desist warnings over their use of the Aboriginal flag on clothing have left many Australians surprised and confused.

A company called WAM Clothing, not owned by Indigenous Australians, currently has exclusive rights to use the flag on clothing. It has issued cease and desist notices to companies including the AFL (which uses the flag on club jerseys for its Indigenous round) and Spark Health, an Indigenous social enterprise. The latter has launched an online petition calling for the copyright arrangements to be changed.

While there is no need for anyone to get permission to use the Australian flag, so long as they abide by the guidelines respecting its use, this is not the case for the Aboriginal flag.

The reason is that the Aboriginal flag is a copyright work owned by the artist who created it over 40 years ago - Luritja man Harold Thomas.

Thomas created the flag for a national Indigenous day in July 1971, and this is not the first time his flag has been embroiled in copyright controversy.

When it was adopted as the flag of the Aboriginal people of Australia by proclamation of the Governor-General on July 14, 1995, several other claimants came forward asserting that they were the artist behind it. Thomas was successful in establishing his claim to authorship before the Federal Court in 1997.

As the creator of the flag, Thomas is its owner and can grant licences to other parties to make copies of the flag, or indeed refuse its use altogether.

Under Australian law, his copyright will last for 70 years after his death, and can be claimed by his heirs or anyone else to whom he might choose to assign it. Thomas can assert his rights against anyone making any copy of the flag, even if they are not selling it or using it commercially - this could even include bringing an action against someone with a tattoo of the flag.

Following the Federal Court decision in 1997, Thomas granted a licence to a company called Flags 2000, giving that company the right to reproduce and manufacture the flag. In 2003, Flags 2000 and Thomas brought a successful action against a man named Mr Smith, who had made and sold copies of the flag without permission.

Today, the licence to use the flag on items of clothing is held by WAM Clothing. This was granted by Thomas in October 2018.

One of the owners of WAM Clothing, Ben Wooster, is also the director of a company called Birubi Art. Last year, the Australian Competition and Consumer Commission brought legal proceedings against Birubi for its production and sales of boomerang and other souvenir products featuring visual images and symbols of Aboriginal art, all of which were produced by artisans in Indonesia.

The Federal Court found that by representing these works as hand painted or made by Aboriginal Australians, Birubi had engaged in misleading and deceptive conduct. A hearing on the penalties and orders against the company will be held this Friday, but it is already in liquidation, which could limit the impact of any orders.

A recent report of the Australian Parliament's Standing Committee on Indigenous Affairs identified the harms caused to Indigenous peoples and communities by inauthentic souvenirs and crafts with no connection to the Aboriginal peoples whose stories, histories and culture they depict.

Together, these issues highlight the difficulties faced by Aboriginal artists in this field. Many people still erroneously believe that traditional styles of painting are not capable of being owned under copyright law. A number of Aboriginal artists have resorted to litigation to prevent use of their designs on an array of commercial products, from currency to carpets.

Read more: 'Dollar Dave' and the Reserve Bank: a tale of art, theft and human rights

What about the petition?

A change.org petition started by Spark Health, whose brand Clothing the Gap raises money for Aboriginal health, states: "This is not a question of who owns copyright of the Flag. This is a question of control."

However, the two cannot be separated: it is the owner of the copyright who has control over how a work may be used.

As copyright owner, Thomas has the right to grant licences to whomever he pleases, whether Indigenous or not.

A former head of the Australian Copyright Council Fiona Phillips has said there could be an argument for the Government to buy back the copyright licence from Thomas. But could this work?

Asking the government to intervene in this way could be seen as yet another appropriation of Aboriginal property rights - in this case, the rights of an artist to maintain ownership of his work.

At the same time, enforcing copyright of such a powerful and well-loved symbol against those seeking to use it to express their cultural identity, solidarity or sympathy, or for charitable causes, gives rise to justifiable resentment.

The symbolism of the flag, expressed by Thomas in the original 1997 court case, is worth remembering here:

Following recent recommendations for reform from the Australian Law Reform Commission and the Productivity Commission, it could be that this case gives impetus for the government to explore ways to make copyright fairer for both artists and users.